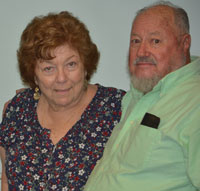 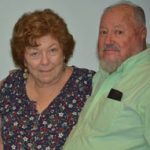 Few assisted living communities can boast residents who ask for an additional parking space for their side car motorcycle.

At Victoria Landing, this was an easy accommodation for Alex Bolen when he and his wife, Jane, decided to move to the assisted living community.

He has owned a classic URAL for 10 years and enjoys driving it around town, taking rides to Sebastian and Melbourne Beach. Its unique looks and ruggedness appeal to Bolen, an avid racing enthusiasts and retired State of New Jersey heavy construction inspector. He explains, he’ll head out on the URAL for a good long ride and stop for a Chinese lunch or at a local hangout. The URAL is a great conversation starter as they are not commonly seen on Florida roads.

Younger than many residents at Victoria Landing at ages 78 for Bolen and 72 for his wife, the couple decided their move to Victoria Landing was a good time to think ahead. Their decision meant should they need help, they are living where others would be taking care of them. Now they don’t need to worry about cooking, laundry, etc. It’s all inclusive services means they won’t need to move again as they age.

Speed and racing have always attracted Bolen. A passionate sports car enthusiast for as long as he can remember, he received his NASCAR racing license in 1965 and raced sports cars on many tracks in the northeast. “I had an old Camaro and 62’ Corvette,” he recalls fondly.

The couple finds the freedom from home maintenance living at the community has given them more time to pursue their interests. While he may head off on the URAL, she volunteers for the Brevard Association for the Blind. She was formerly a reader and now works in their offices. She plays mahjong and goes to CURVES three days a week.

The couple feels they are living right in the middle of everything and enjoy the conveniences near Victoria Landing as well as being near Jane’s three sisters who live in Melbourne Beach.

In addition to car racing, Bolen was also an enthusiastic sailor. He owned a New England catboat and enjoyed boat racing in New Jersey at Toms River Yacht Club.

He built model boats and his painstakingly crafted schooner now is on display in the library at Victoria Landing. He enjoys sharing this aspect of his life with his new neighbors.

Call Us Today To Schedule A Tour!

Victoria Landing Assisted Living is a rental community with incredible views of the Indian River and Historic Downtown Eau Gallie. Our Mission is to provide consistently excellent service to those we touch combining independence and personal care in a residential setting.

Victoria Landing is a community built with character and spirit. It’s a place full of pride. It’s a place all of us would like to call home.