CDC Says Vaccinated Seniors Can Hug, Visit, and Stream With Their Children and Grandchildren Again 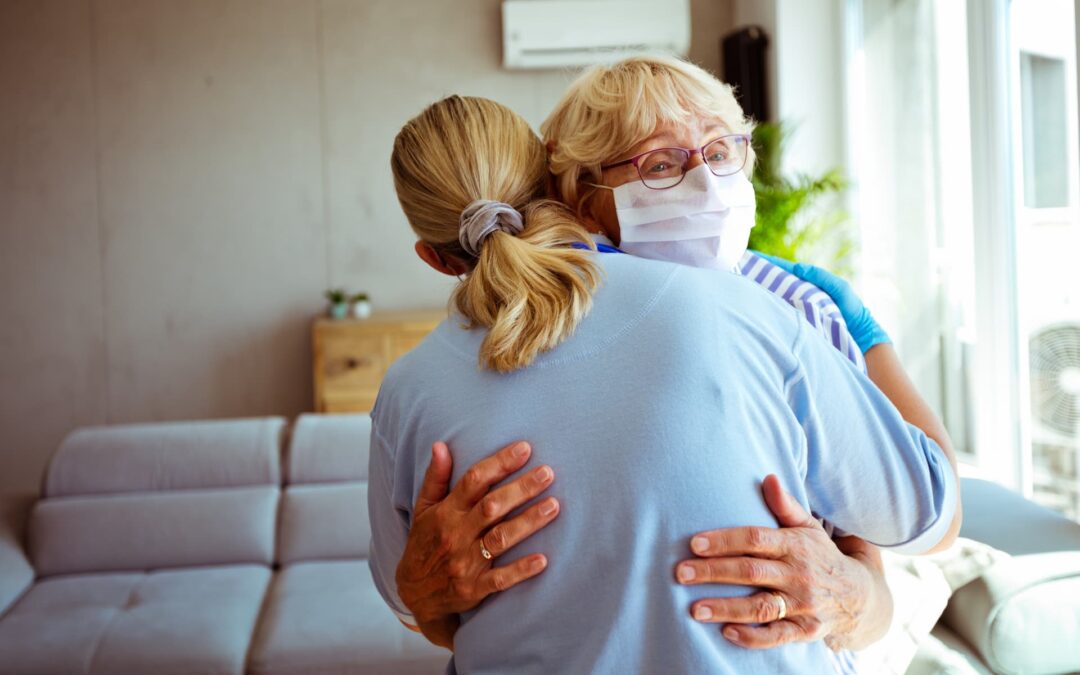 According to the Associated Press, as of mid-March 2021 about 3.8 million Floridians, including 2.7 million seniors over 65, have gotten at least one shot of three different vaccines approved in the United States to protect against the coronavirus.  New guidelines from the Centers for Disease Control and Prevention (CDC) allow fully vaccinated people to visit unvaccinated, low-risk family members (from a single household indoors).

From Tech Novice to Tech Masters

On March 11, 2020 former President Trump announced the COVID-19 pandemic had risen to the level of a national emergency. Broad sweeping lockdowns, travel bans, and shelter-in-place orders spread throughout the United States like a rapid, unexpected wildfire igniting radical change in nearly every American’s daily routine. Many adults over age 65 had no experience with Zoom, FaceTime, Google Hangouts, streaming video, online chats, the world wide web or any of the like.  As the days of isolation rolled into weeks, months, and now over a year, seniors were forced to become part of the technology savvy generation of their children and grandchildren.  Bloomberg reported after just two months into the pandemic, “the ‘New Normal’ for many older adults is on the Internet … and expanded tech literacy is a new skill that may stay with them long after lockdowns lift.”

While the new CDC guidance is helping vaccinated seniors feel more comfortable spending time with family unmasked, many remain uncertain about resuming regular activities such as shopping, dining out, and other non-essential comings and goings.  The intersection of older adults’ new technology talents and the reluctance to resume all formerly normal activity has resulted in reunions largely wrapped around streaming movies.

Families and Friends who Stream Together Stay Together

At Victoria Landing Assisted Living and Memory Care, located in Melbourne, FL on the banks of the serene Indian River, movie matinees, courtesy streaming documentaries, and “Wine Down with a Movie” events are just a few special weekly activities our seniors enjoy with friends and family.  The onsite movie theater is one of the many extra interior touches that make Victoria Landing assisted living unique. Our residents ‘live large’ with riverfront dining, chef inspired gourmet meals, and daily mental and physical wellness indoor / outdoor activities.  The beautifully appointed grand auditorium, Hemingway Library, lounge with a view, and card/game room provide stimulating social experiences and entertainment.  There is no question at Victoria Landing, your one-of-a-kind waterfront assisted living home, there is something for everyone including our newly streaming seniors.

If you and your visiting children or grandchildren are interested in “fun comedies, delightful dramas, and big stars,” check out this list of “12 Great Movies You Can Stream Right Now” from the American Association of Retired Persons (AARP) website (12 Movies to Stream if You’re Stuck at Home (aarp.org))

Beautiful Day in the Neighborhood (2019)

AARP readers’ favorite movie of 2019 starred Tom Hanks, 63, as the nicest guy in TV history, kids’ show host Fred Rogers. Hanks conveys Mister Rogers’ crinkly-eyed goodness, his gravitas and vulnerability. We could all use a soothing, soulful movie like this right now.

In a wickedly entertaining film about attempted marriage fraud, Ian McKellen plays a super-cool con man and Helen Mirren a gorgeous retired Oxford prof who’s saved up $3.6 million but has no clue how to invest money. He thinks he can help. The Times of London called Mirren and McKellen “the new Hepburn and Tracy,” with good reason. They’re sexy, witty and a bit unpredictable. Downton Abbey‘s Jim Carter is great as McKellen’s henchman.

It’s a racetrack movie that’s also an acting competition between Oscar winners Matt Damon and Christian Bale — and everybody wins. Based on a true story, it’s about a renegade 1960s car designer (Damon) and crazy British driver (Bale) who want their underdog Ford Motors team to humiliate the snooty Italian Ferrari team at Le Mans. Spoiler: They did it, and you’re strapped in for quite a ride. It boasts much of the pedal-to-the-metal appeal of the Fast and Furious films, plus delightful humor, fantastic acting and a ripping story.

So, you canceled your Mediterranean trip? This smash musical will whisk you to a sun-splashed Greek isle along with Amanda Seyfried, playing a bride who invites her mom’s once-wild 1960s lovers (Colin Firth, Pierce Brosnan and Stellan Skarsgård) to her wedding to find out which is her dad. Tom Hanks and wife Rita Wilson (who both tested positive for coronavirus) produced this triple rom-com with the smash-hit ABBA soundtrack.

Relive America’s peak moment of technological triumph, shared and celebrated by humanity, in this must-see documentary. Astronaut Buzz Aldrin says it’s the closest anyone has come to re-creating the experience of the first mission to the pockmarked surface of the moon. With 11,000 hours of newly recovered recordings, you are there aboard the Eagle as it perilously lands, and the heroes even more perilously return. It captures the spirit of those who watched all over the Earth and takes us back to a time when we gazed up at the stars with wonder. It’s nostalgia, but also it gives us hope right when we need it.

It’s the next best thing to a new season of the phenomenal PBS hit series about Britain’s aristocratic Crawley clan, who now reluctantly accept the fact that it’s 1927. But you don’t have to have seen the series to get it. Downton’s dowager countess (Maggie Smith) keeps her chin high, trading haughty insults with her rival Isobel (Penelope Wilton), and concealing an enormous secret fans will want to hear. Everyone is on edge because the King and Queen are coming to visit.

A wonderful, wise coming-of-age comedy by House‘s Olivia Wilde, it didn’t get the audience it deserved in theaters and is perfect for the home screen. Beanie Feldstein and Kaitlyn Dever are terrific as nerdy scholarly girls who panic on the last night of high school, feeling they’ve missed all the fun, so they go wild. Just as good as the boy-centric Superbad.

A comic masterpiece that lasts, thanks to the authentic girl-bonding of SNL vets Kristen Wiig and Maya Rudolph, plus the wonderful Melissa McCarthy. Wiig plays Rudolph’s neurotic bestie and maid of honor in an extraordinarily ill-fated wedding that makes you weep with the laughter of recognition, and also tugs heartstrings.

Comeback king Eddie Murphy, 58, brings down the house in this funky biopic about the Ed Wood of blaxploitation, Rudy Ray Moore, best known for his character Dolemite. With its danceable soundtrack, corny jokes, killer cast (Wesley Snipes, Chris Rock, Keegan-Michael Key, Snoop Dogg) and paunchy underdog hero who works in an L.A. record shop while dreaming of glory, this movie is as American as shrimp ‘n’ grits. The sexy songstress Lady Reed (Da’Vine Joy Randolph), whom Moore discovers in a backwater juke joint after she decks her cheating husband, gives Murphy his best foil yet in a groovy, entertaining film.

In a film as sharply engineered as a Swiss Army knife, the cast isn’t just a collection of stars each getting a lively scene or two, as in many star-studded murder mysteries (like Kenneth Branagh’s good Murder on the Orient Express, streaming on Amazon, YouTube, Google Play and Vudu). In a smoothly fused comic unit, Daniel Craig, Jamie Lee Curtis, Ana de Armas, Chris Evans, Don Johnson and Michael Shannon play relatives maneuvering for the fortune of their late patriarch (Christopher Plummer, on a huge career roll). Each scheming relative casts revealing light on the others’ characters and advances the clever plot. Craig’s Southern-fried detective Benoit Blanc is way better than his James Bond.

It’s more heartwarming than most conventional rom-coms, and way more interesting. Bradley Cooper plays a bipolar guy forced to move back in with his protective folks (hard-core Philadelphia Eagles football fans Robert De Niro and Jacki Weaver) and courting an also volatile widow (Jennifer Lawrence at her best). It got eight Oscar nominations, including Lawrence’s best actress win, and helped make director David O. Russell a comeback hit maker at 54. It’s inspired partly by Russell’s bipolar son, so it’s a comedy with serious dramatic roots. It gets you laughing, but it plays for keeps emotionally in a way that few movies do.

Morgan Freeman narrates a tale more gripping than the usual Oscar-winning nature documentary — it makes you feel like you’re among the Antarctic emperor penguins in their fight for love and survival. It’s 70 below zero, the winds are 100 miles per hour, you have to go months without food and waddle 70 miles to your breeding grounds. Humans were never so courageous and inspiring — nor half so adorable.

To learn which services are streaming these classic movies, visit the AARP website link above. We hope you and your loved ones enjoy some of these streaming recommendations.

At Victoria Landing Assisted Living and Memory Care, our seniors receive that extra special attention from our professional and compassionate staff to ensure they always feel mentally and physically safe, and of course, entertained!

Visit us soon at Victoria Landing Assisted Living and Memory Care located in Melbourne, FL where you will find special incentives to help your loved ones fulfill a quality physical and mental wellness lifestyle with dignity, grace, and reverence.  For a limited time, we are waiving the standard $3,000 assisted living community fee and paying for your loved one’s move-in costs up to $500. Learn how Brevard County’s premier assisted living community provides happiness, health, and heart for our seniors like no other.

Call Us Today To Schedule A Tour!

Victoria Landing Assisted Living is a rental community with incredible views of the Indian River and Historic Downtown Eau Gallie. Our Mission is to provide consistently excellent service to those we touch combining independence and personal care in a residential setting.

Victoria Landing is a community built with character and spirit. It’s a place full of pride. It’s a place all of us would like to call home.

Great, we’ll see you at the event!